"Adelaide is a thoroughly modern town, with all the merits and all the defects attaching to novelty. It does not possess the spirit of enterprise to so adventurous a degree as Melbourne, but neither does it approach to the languor of Sydney." - R. Twopeny, 1883

I found the Ship Inn!

I found the Ship Inn…

Remember Sophia? She was the one who gave birth in a hen house in a garden on Currie Street. Earlier in the morning, she'd had a nobbler of brandy at the Ship Inn and the hen house was next door. I had never heard of the Ship Inn before learning about Sophia. It wasn’t the name of any pub I knew in Adelaide. I looked on the digitised newspapers, but ‘Ship Inn’ disappears soon after Sophia’s time and I couldn’t find anything else. Until I found this. 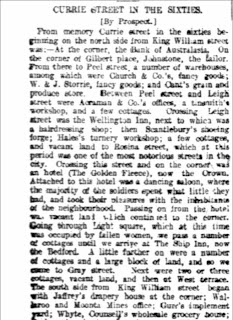 It's a bit small, but part of it says: "Going through Light Square, which at this time [1860s] was occupied by fallen women, we pass a number of cottages until we arrive at The Ship Inn, now the Bedford. A little farther on were a number of cottages and a large block of land, and so we come to Gray street." The author clearly ignored North Street, or it didn't exist at the time.

This article popped up when I searched for ‘Currie Street’ (I guess ‘Ship Inn’ didn’t read well on their search engine). So, by World War I, it had been renamed the ‘Bedford’. So, I did another search for Bedford Hotel, Currie Street and found a photo from 1891, some ten years after Sophia’s time. I won’t post the photo here, as it’s under copyright and I don’t want to get in trouble(!), but the link is here [opens in a new window] if you want to look at it yourself. I think it looks quite nice. The caption underneath reads: “Currie Street, north side, right side of the Bedford Hotel is 2 yards west of Elizabeth Street and frontage is 15.5 yards”.

Two yards west of Elizabeth Street (estimated, of course. I didn’t bring a ruler with me) is now…not a hotel. Unfortunately, I couldn't take a photo because the building is being renovated and there were fences up. I did get a photo of the side of the building, though. The wall is made of stone and looks old - who knows what it could tell us if it could talk?! 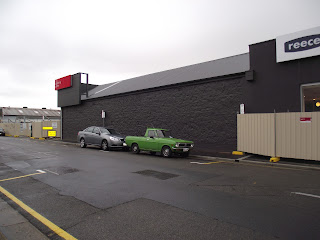 Mrs. Gearing, the woman whose hen house Sophia gave birth in, lived next to the Ship Inn. I found this carpark on Elizabeth Street – maybe this was where Sophia’s baby was born? Maybe not? If Mrs. Gearing lived on the other side of the Ship Inn, Sophia might have given birth in this carpark. 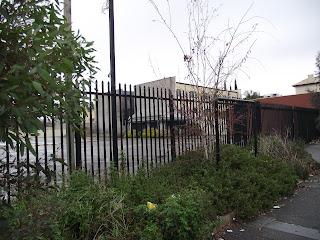 All I can say is there’s a lot more than meets the eye. There are buildings in Adelaide that look old and look like they could tell a lot of stories, but this one – at first glance – is not one of them.

When the weather is a little nicer, I'm going to explore more of the west end and take lots more photos. Until then, have a photo of Light Square...just because. [You can see how dark and miserable it was - this is the middle of the day!] 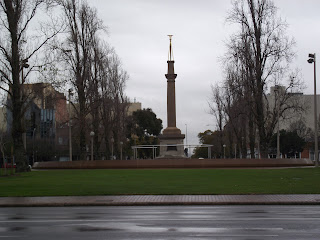 Thank you for your comments; I really appreciate them :)

historygirl
An Adelaide girl who loves history (hence the title) and wants to present a different view of Adelaide's history. I admit it's often fairly bleak, but I try to break up the sad stories with some happier ones. Please leave a comment if you read a post :) Thank you